The race kicked off in Chungju with several teams going the attack early on. After 10km, six riders managed to break free and eventually worked up a gap of over 2:00. The Team Novo Nordisk squad was happy to let the riders go, and worked inside the peloton to control the race and protect Megias. “We worked really well with Nippo-Vini Fantini to defend the G.C.,” Megias said. “Together, we controlled the race well.”

Brad Evans (Drapac Professional Cycling) and Kristian House (One Pro Cycling) shared the victory, as a photo finish was unable to determine the winner then they arrived at par.

“My teammates are working incredibly well,” Megias went on to say. “They helped me in the sprint to finish in front of the guy who’s 3rd in G.C., so everything went according to plan. Tomorrow will be same: attacks and more attacks. We will try to control the race and to defend my position.” 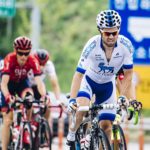 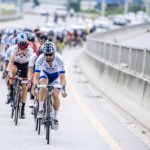