Kalundborg, Denmark — Andrea Peron suffered a crash on Stage 1 of the PostNord Danmark Rundt, which forced the Italian sprinter to withdraw from the five-day race.

Peron went down in a large crash around the 100-kilometer mark at a point where the road narrowed. After receiving immediate attention on the side of the road, he was transported to the hospital.

“X-rays confirmed a non-displaced, non-operative fracture to his left clavicle. He will need six to 10 weeks off from racing to heal from his injuries,” explained Team Novo Nordisk Doctor David Castol.

Throughout Tuesday’s 176.6-kilometer race, the peloton fought through rainy and windy conditions. A six-man breakaway had earned a maximum gap of five minutes, but in an unusual turn of events, the escapees took a wrong turn off course and officials neutralized the race to reestablish their gap. The escapees were reeled in as the race approached Kalundborg.

Immediately, attacks flew as the peloton contested three finishing circuits. The high pace and strong winds splintered the field into several groups and in the end, European Under23 champion Casper Pederson (Giant-Castelli) soloed to the win ahead of a 40-man chase group. 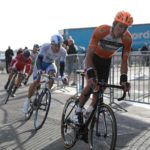