Three Mountains and a Big Finish at Tour of China

Race: ST2 Tour of China I

YUNZHUHU, CHINA – Stephen Clancy, Sam Brand and Chris Williams finished in the front groups at the second stage of the Tour of China on Tuesday, after a tough day climbing from Xiyang to Yunzhuzu.

Clancy and his teammates began stage two after a travel day on Monday crossing more than 1000km after the flat and fast opening stage on Sunday. Tuesday’s stage featured a first category climb sandwiched in the middle of the race, with a pair third category climbs near the start and finish.

Italian rider Liam Bertazzo won a field sprint of more than 70 riders after four and a half hours of racing, ahead of Belarusan Siarhei Papok and Australia’s Cameron Bayly.

Following stage two the race moves further down the Chinese mainland, with a 350km transfer on Tuesday, and a rest day on Wednesday to cover the remaining 750km to the start of Thursday’s stage three.

“Relaxed today, no stress. The hard parts are coming ahead.”

“Three categorized climbs today split the bunch, but there was a big group at the finish and we put three guys in there at the front, including Chris Williams and Sam Brand. Coming up are some more climbing stages and a short individual time trial.”

Team Novo Nordisk continues in the Tour of China I and II through next week, and is also racing in Europe at the Post Nord Dansk Rundt, also known as the Tour of Denmark. 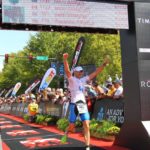 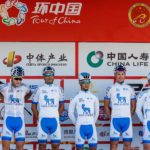