Saint-Georges, Canada — Team Novo Nordisk raced twice on Friday in Canada, starting with a 20-kilometer out-and-back time trial in the morning and a short but intense evening road race that finished near the Riviere Chaudiere in Quebec.

In the evening, the race began under threatening skies, but the roads remained relatively dry throughout the 77-kilometer course. Breakaways flew from the start, which immediately caused the race to splinter into three groups: breakaway, chase, and peloton. The break eventually grew to 18 riders but then shed four riders halfway through the race. The peloton was strung out as it laid down the chase, but with three kilometers to go, the escapees still had 35 seconds. In the end, Chris Lawless (Axeon Hagens Berman) won up an intense final kicker with Cowan holding onto the leader’s jersey.

“It was an intense, fast road race. I think racing at 6 pm following a time trial. After all the cold rain, this made motivation a little low for most of the peloton. A break established early on, and it was touch and go for a while if they’d come back, but it didn’t in the end. We know it was a missed opportunity, so we need to do something tomorrow in Quebec City.”

Team Novo Nordisk, the world’s first all-diabetes pro cycling team, is currently competing in two races: Tour de Korea and Tour de Beauce. Saturday’s Stage 4 of the Tour de Korea is a 156-km run from Yeongju to Chungju and features one categorized climb and at the Tour de Beauce, it’s a 35-lap criterium around a 2-kilometer course in the heart of Québec City. 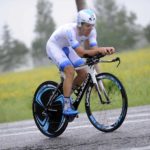