ZABRZE, POLAND – Chris Williams stuffed panty hose filled with ice cubes down the back of his Team Novo Nordisk jersey to beat the heat on Tuesday as stage four of the Tour de Pologne spent more than five and a half hours racing through towns and villages in southern Poland.

An early breakaway of six riders assumed responsibility for the race lead out of Zawiercie, pronounced Za-ver-che, and kept as much as seven minutes ahead of the peloton on the way to the finish in in Zabrze (pronounced Zab-zhe).

As temperatures rose to 37ºC/99ºF on the road, Williams and his teammates, along with most of the professional peloton, shuttled back and forth over the hours to reload with bottles of water, Nuun rehydration drinks and sacks of ice.

Soigneurs prepared the bottles and the ice ahead of time, and filled coolers with hundreds of bottles and the clipped and knotted portions of panty hose to replenish and cool the riders. On Tuesday Team Novo Nordisk handed out almost 200 bottles and more than 40 ice sacks to the riders.

In Zabrze the peloton caught the breakaway, and Caleb Ewan of Australia won a group sprint ahead of Danny Van Poppel of the Netherlands. World Champion Peter Sagan remains race leader for Wednesday’s stage five.

“Today was probably just as tough mentally as it was physically. 34-36 degrees all day, so we were going back to the car and getting little bags of ice and stuffing them down the backs of our jerseys just to try and stay cool.”

“The heat today was a very big factor for everybody, and for the body to stay cool during the race we did everything we could to keep ice and drinks cold and ready for the riders.” 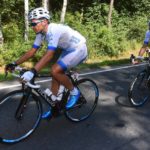 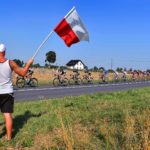