Vordingbord, Denmark — Team Novo Nordisk’s Charles Planet (FRA) shined in the PostNord Danmark Rundt Stage 3 breakaway, taking maximum points in the hill classification, winning the first intermediate sprint and being runner-up through the second one. The standout ride earned the 24-year-old Frenchman the Julemaerkefonden Fighter Jersey.
Friday’s Stage 3 of PostNord Danmark Rundt saw the peloton tackle a 178.4-kilometer race from Naestved to Vordingbord. Riders attacked from kilometer zero and Planet grabbed a wheel. The five-man group worked well together and earned a maximum gap of 5:15.

With 60 km remaining, Rally Cycling launched an attack from the peloton. Robin Carpenter, who is third overall in the race, and Krists Neilands (Israel Cycling Academy) started to chase down Planet’s group, but they were never able to close the gap. After they were reeled in, the peloton worked to bring in the escapees, but the five riders reached the finishing laps with a 30-second gap. They held off the chasing peloton until the final lap.

“This jersey is for my parents, especially my mother. She was the true fighter during my childhood after I was diagnosed with diabetes. My family taught me to be a fighter, and I’m so proud to earn this jersey and show my true character. This podium and jersey are so much bigger than me. I can’t put into words how much I wish this team existed when I was a teenager. It would have given me so much hope knowing that I could believe in myself. I hope everyone with diabetes sees this jersey and knows it is for all of us. Together, we are fighters.” 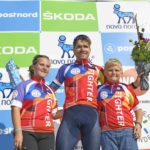 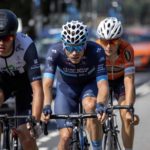