Stagiaire Tested in the Sprint at Tour of China II

YONGZHOU NINGYUAN, CHINA – A short and flat stage gave way to a wide-open field sprint on Tuesday in stage 2 at the Tour of China II.

After an opening prologue on Monday the peloton moved out to open the first road stage of the second week of racing at the Tour of China, with a fresh start to the General Classification for the world’s first all-diabetes pro cycling team.

Overnight rain dried out on the roads during the day, and as expected the whole peloton came together to the line after 99km in a mass sprint for victory. Team Novo Nordisk stagiaire Declan Irvine was the top finisher for the world’s first all-diabetes pro cycling team, finishing in the same time as stage winner Juan Sebastian Molano of Colombia.

On Wednesday the riders will race 128km with two classified climbs in the Qingyuan Fogang stage, but all indicators point to another sprint finish and another chance for Team Novo Nordisk at the Tour of China II

“Today’s stage ended up being a really difficult stage. The breakaway went quite early, but the two teams that were in the break were quite strong and we didn’t catch until about 10km to go. I had an untimely flat tire, and after that I found the rest of the race just really difficult. It was a really tough chase back on. We got up there for the sprint, but not as well as we’d hoped. But onwards and upwards. The next stage is about 350km from here, so we’ll have about 5 hours in the van to transfer.” 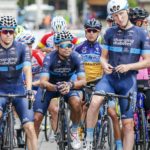