Stagiaire Shines at Tour of China

QIANJIANG, CHN – Once again it was a day for the sprinters in the Tour of China I, with a moderate distance of 113km covered in 2:31 by the peloton, for an average speed of 44.9km per hour.

Declan Irvine led Team Novo Nordisk across the line on Thursday, crossing the line in the same time as stage winner Damiano Cima of Italy on a day where virtually the whole peloton and all 22 teams took part in the sprint.

Irvine races as a stagiaire in the Tour of China I, and the all-round athlete from Australia has come up entirely within the Team Novo Nordisk development program based in Athens, GA. The 19 year old Australian raced in Estonia at the Baltic Chain Tour with his Devo Squad teammates in August and then came across to the Pro Team earlier this month.

Friday is a rest day at the Tour of China I, and the whole peloton will transfer some 600km south to Xinning Langshan, a trip expected to last more than eight hours, before Saturday’s seventh and final stage in the first week of the two-part Tour of China.

“Stage 6 is done and dusted. 113km, very flat, very, very fast. It ended up being a bunch sprint, exactly like we thought. All of us came together at the end to lead out Mehdi, and it went perfectly. We did really good as a team, and everyone was doing exactly what they had to. But several teams were fighting for position, and there just wasn’t enough space for 22 teams.

We’ve got stage 7 still go, so hopefully it all comes together for us there. Tomorrow we have a 9-hour transfer, so a long day in the car. But it’ll be a good day resting, just watching movies and kicking back, talking to the guys and having a bit of fun getting to see China. So I’m pretty stoked.” 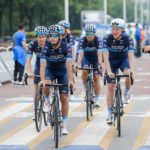 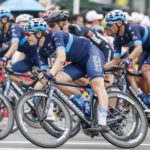