Silkeborg, Denmark — Team Novo Nordisk raised the curtain on their seventh consecutive PostNord Danmark Rundt with a top 20 result. Andrea Peron sprinted to 16th place in a hectic finale that saw a select group outfox the peloton and fight for the stage win.

With two jerseys up for grabs on the opening stage the fight for the breakaway was fierce from the start. Multiple riders attempted to get away, including our Frenchman Charles Planet, but the moves were systematically closed down during the first 30km.

The peloton started to invest in chasing down the escapees half-way through the stage and with 80km to go the advantage was shaved down to under one and a half minutes.

The breakaway was eventually swallowed up by the peloton in the sterrato sector, as the race entered the last 45 kilometers. Soon after, Lotto Soudal took the reigns of the race and upped the pace significantly trying to split the bunch. A few riders managed to attack and a quartet opened a gap of 43 seconds before, they too, were caught just inside the final circuit.

A flurry of attacks ensued but the winning move came in the last three kilometers when a handful of riders, including Lotto Soudal’s Jasper de Buyst and Tiesj Benoot forged ahead. Meanwhile, in the ever diminishing peloton, Team Novo Nordisk looked sharped and focused on keeping Andrea Peron in a good position, however the select front group managed to stay away and Benoot crossed the line first to claim the opening stage of PostNord Danmark Rundt.

Peron was 16th on the day and was Team Novo Nordisk’s best placed rider. Our fast Italian sits in 18th in the general classification moving into stage 2.

This Thursday the world’s first all-diabetes professional cycling team will continue to race to change diabetes in PostNord Danmark Rundt as they take on an 17km individual time trial in Grindsted that will make the first real selection in the fight for the overall classification.

“About 10 guys went clear and we were really close but couldn’t close the last few meters before the finish. I did my best in the bunch sprint but to be honest there were too many riders in front. I had a puncture at a crucial moment with 30 or so km to go and I lost around three minutes. I managed to come back to the bunch but wasted a lot of energy. It’s a bit disappointing because we had the opportunity to have a Top 10 result already in the first day but we will fight again”

“There were a lot of attacks in the beginning with a lot of Danish riders trying to be in the break. It took 30 km for the right breakaway to go. I truly did my best to be there, I was in quite a few moves but I missed the right one. I’m disappointed, I felt really good but unfortunately today wasn’t meant to be. It is what it is and I will for sure try again the day after tomorrow” 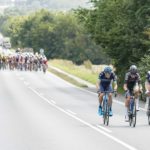 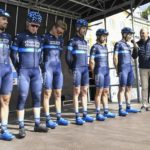