Roskilde, Denmark — Charles Planet powered to a splendid top 10 placing on the penultimate stage of PostNord Danmark Rundt 2019, scoring the best result on a stage for Team Novo Nordisk since 2013.

The 175 km-long stage started in Korsør’s harbour and our Changing Diabetes riders were very active from the start with Umberto Poli, who rode bravely in the breakaway on the previous day, fighting to go clear as well as teammate Joonas Henttala. However, those moves were folded and when a six-rider strong breakaway escaped Team Novo Nordisk wasn’t represented at the front. The escapees opened a gap of over five minutes before the peloton began to progressively reel them in. As the race entered the final 75 km the advantage was down to less than one minute.

The action heated up when the riders hit the hilly finishing circuit, that included a final 600 meters steep climb. The last of the escapees were caught inside the final lap and the stage was decided in a reduced bunch sprint with Charles Planet taking a solid 10th place, just five seconds shy of the winner, Lotto Soudal’s Jasper de Buyst. Coming off a great performance in Tour of Poland, where he won the first World Tour jersey in Team Novo Nordisk’s history, the 25-year-old Frenchman finished off a solid day of teamwork and scored the first top 10 result for the squad in the Danish race since Andrea Peron sprinted to 9th place on Stage 1 in the 2013 edition of PostNord Danmark Rundt.

With this result Charles Planet climbs seven spots in the general classification and is now sitting in 23rd place.

The world’s first all-diabetes professional cycling team will conclude its seventh consecutive PostNord Danmark Rundt this Sunday with the traditional stage to Frederiksberg, which this year starts in Roskilde and covers a distance of 165 km.

“Everyone said the queen stage was yesterday but for me today was harder. The final circuit was really hard, the climb was longer and the pace was hard all day. My goal was to save my legs as much as possible to try my best at the end. My team was fantastic! Peter (Kusztor) put me in the right position in the final 5 km and then I just had to let the legs do the speaking. Maybe I need to be more confident in myself because I think I was one of the best riders in the peloton today and in the end I got a top 10 which makes me really happy! I’m really proud of my effort today!” 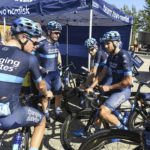 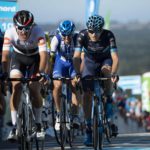