Kraków, Poland — Team Novo Nordisk celebrated their return to Tour de Pologne with a brilliant performance on the opening stage by Charles Planet who went in the day’s breakaway and won the first King of the Mountains jersey in the seven-stage World Tour race.

The short and relatively flat first stage of Tour de Pologne started and finished in Kraków and Team Novo Nordisk was committed to animate the race and show the #ChangingDiabetes jersey at the front.

Frenchman Charles Planet attacked from the gun and was joined by two riders from the Polish National team: Jakub Kaczmarek and Adrian Kurek. The trio received the green light from the peloton and successfully opened a three-minute gap in the early stages. With the King of the Mountains and Sprint jerseys up for grabs Planet set his sights on guaranteeing a podium at the end of the day and the 25-year-old Frenchman did not disappoint. Kurek took the intermediate sprint but he later crashed and returned to the peloton leaving the now two-riders breakaway alone at the front with 100 km to go.

Planet took the KOM at the top of the Cat-4 Lanckorona climb and shortly after doubled his tally in the Witanowice KOM with 56 kilometres to go. With the King of Mountains Jersey now secured Planet stamped his authority in the last climb in Kaszów making it a clean sweep before being caught by the peloton inside the final 15 km.

As the peloton took on the first of four laps of the final circuit in downtown Kraków the peloton was compact with our Italian fast man Andrea Peron well positioned in anticipation of the final sprint.

Unfortunately a crash in a corner with 3.5 km to go, that took down Mark Cavendish (Team Dimension Data) amongst others, split the group and Peron was left with a lot of ground to make up. Peron dug deep but had to settle for 27th position while Pascal Ackermann (BORA – hansgrohe) out-sprinted the competition to take the stage win and become the first general classification leader at the 76th edition of Tour de Pologne.

Planet did very well to finish in the peloton and sits in fourth position in the overall classification.

This Sunday the world’s first all-diabetes professional cycling team will continue to show what’s possible with diabetes on stage 2 of Tour de Pologne, another flat stage that will start in Tarnowskie Góry and finish in Katowice over 152.7 km.

“I was in the first move because knew it was a good opportunity for the team and for myself to get a jersey. When it’s a sprint finish I have no pleasure to stay in the peloton so I try my hardest to go in the breakaway. I was fighting really hard in the neutral before the start to be in position. I took a lot of risks in the first few corners and then I saw I had a gap along with two Polish riders.

They had the numbers so I was a bit concerned they would play that card in the fight for the jersey but I saw I was the strongest and was really confident. It was a perfect day, an amazing start for us and I’m really happy. Tomorrow the stage will be similar I will talk with my directors and discuss the plan.

This is a World Tour race and this is the King of the Mountains jersey. I will give my all to defend it for as long as possible. I will fight until I don’t have any legs left!” 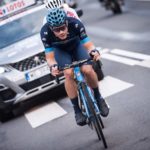