Zakopane, Poland — Team Novo Nordisk’s Charles Planet overcame a harrowing climbing day and kept a firm grip on the Blue “Most Active Rider” jersey with one stage to go in the 76th edition of Tour de Pologne.

Starting in the ski resort of Zakopane the penultimate stage of the Polish World Tour race offered no less than seven Cat-1 climbs and over 4000m of climbing on the menu. After four nearly consecutive breakaway performances and still recovering from a crash on stage 3, Planet was focused on managing his effort and safely finish the day, thereby keeping the solid lead in the “Most Active Rider” competition.

After nearly an hour of successive breakaway attempts and a very hard tempo that resulted in several splits in the peloton, four riders opened a respectable three minutes gap. Peter Kusztor showed his climbing pedigree by staying in the main field until three laps to go, while his Team Novo Nordisk teammates rode in support of Planet, several minutes in arrears.

In the penultimate climb, with 16 km to go Ben Swift (Team INEOS) launch a solo attack and rode solo until 6 km to go when he was caught by a select group of three riders: Jai Hindley (Team Sunweb), Pavel Sivakov (Team Ineos), and Jonas Vingegaard (Jumbo-Visma).

The trio ended up sprinting for the win and Vingegaard took a convincing win in the finishing uphill drag to the line and seized the lead in the general classification standings.

Two-times Hungarian national champion Peter Kusztor finished in 47th position as the best placed Team Novo Nordisk rider on the day while Planet rode efficiently and crossed the finishing line with three of his teammates to keep a firm grip on the “Most Active Rider” competition.

With only three intermediate sprints to fight for in the final stage Charles Planet only has to conclude the race to climb onto the final podium and bring home the Blue Jersey.

“It was a really hard stage around Zakopane with five laps, that included two big climbs each time. We started climbing right from the gun. I went as hard as I could on the first climb and them I just found my group and managed my effort to the finish. After four days in the breakaway and a big crash I just focused on finding my pace and surviving the day. It was really tough but I had a lot of help from my teammates. They were amazing and I have to thank all of them. Now I have enough points to keep this jersey tomorrow.” 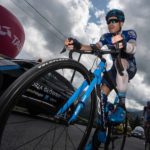 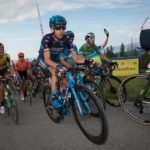