Lozano Finishes with the Favorites at Tour du Rwanda Opener

Kigali, Rwanda, February 24, 2019 —Team Novo Nordisk kicked off their campaign in the 2019 edition of Tour du Rwanda with a solid team effort that saw Spaniard David Lozano finish safely in 17th position in the group of the main favorites.

Running as an UCI 2.1 event for the first time ever the 11th edition of the Tour du Rwanda started with a short but hectic 111,8km stage in Kigali. The rainy and cold conditions at the start dissuaded most of the 16 teams peloton from going on the attack but eventually a break of four riders broke free.

Florian Hudry (Interpro Cycling Academy), Rohan du Plooy (ProTouch) and Bonaventure Uwizeyimana (Benediction) quickly opened a sizable gap before Moise Mugisha (Rwanda) managed to bridge across. The four-man break were allowed to build an advantage of over five and a half minutes before the peloton was stirred into action.

As the race entered in final circuit in downtown Kigali it was all together and a bunch sprint was within sight.

Team Novo Nordisk rode strongly all day and kept Lozano always in the best position in the key moments of the stage. However, as the peloton entered the last 500mts the Spaniard narrowly avoided a crash, had to hit the breaks and was taken out of contention for the stage. Nevertheless, Lozano did very well to finish with the main favorites in the 17th place on the day, just six seconds shy of the winning time.

The world’s first all-diabetes pro cycling team continues racing at the eight-day Tour du Rwanda on Monday. The 120.5km Stage 2 will begin in Kigali and finish in Huye and will include 4 categorized climbs.

“It was a really nervous stage which is always the case of any stage race. The end was hard because we had a circuit with three climbs. All the team protected me well during the day and in the end, with five kilometers to go I was there with Joonas (Henttala) who closed some gaps which gave me a little bit of calm before the last hill. I did my best, I was 17th in finish, it wasn’t a top result but I look forward to build on it and be better in the next stages.”

“I’m really happy with the first stage because all the team executed the strategy that we set up prior to the race. The field is stronger this year and we adjusted the tactics according to that in order to help David (Lozano). I felt that everyone really committed themselves and did a great job in executing the strategy that was established, so I’m happy about how today went.” 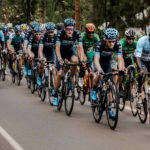