Abu Dhabi, UAE — Team Novo Nordisk began the seven-day UAE Tour on Sunday with a 16-kilometer team time trial (TTT). This was the team’s first TTT in nearly two years — since the 2017 Tirreno-Adriatico. With sunny skies and nearly no wind, seven riders from the world’s first all-diabetic professional cycling team set out as the second team on course.

A team time trial is a unique discipline where athletes compete as teams against the clock. Team Novo Nordisk raced on their Colnago K-Zero framesets equipped with rear disc wheels, Catlike aerodynamic helmets and Vision- Full Speed Ahead technical handlebars and extensions. The flat, fast course featured wide-angle turns and only two U-turns to slow down speeds.

“We were all a little nervous this morning because this isn’t a discipline that we do often and none of us had trained together until practice yesterday. We learned quickly, listened to one another and took strong turns. I would say we executed very well for a team that doesn’t focus on the team time trial.” 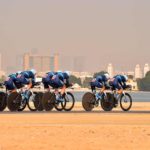 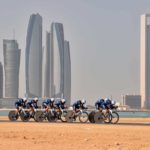 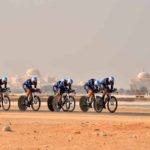