Team Novo Nordisk Kicks off the Tour of California with Podium

Sacramento, California — Team Novo Nordisk’s Charles Planet earned the Amgen Breakaway from Cancer Most Courageous Rider Jersey after spending 125 kilometers in the breakaway including a late-race solo attack on Stage 1 of the Amgen Tour of California.

“The plan from my director was to get in the break and it went perfectly. I got up there with a few guys and then my goal shifted to getting a jersey,” said Planet. “I’m so proud to wear this beautiful jersey tomorrow at this amazing race. I hope it inspires everyone affected by diabetes or any other condition to keep chasing their dreams.”

The 25-year-old Planet was diagnosed with type 1 diabetes at age 10. The Amgen Breakaway from Cancer Most Courageous Rider Jersey is awarded daily to the cyclist who best exemplifies courage, sacrifice, inspiration, determination, and perseverance. Planet wore the jersey back in 2014 on Stage 2 and Stage 3 of the race.

“I remember being here five years ago and earning this jersey. It was my first day ever racing in America. I was only 20 years old, I couldn’t speak any English, and it came as a bit of a surprise. Fast-forward to today and my goal going into the day was to get a jersey.”

On Sunday’s opening stage, Planet was part of a four-man breakaway that escaped immediately following the start of the 143-kilometer race. The peloton kept the escapees on a tight leash and only allowed a maximum gap of two minutes. When the gap dropped under a minute, the breakaway splintered, and Planet set off alone. Despite a valiant effort, the Frenchman was reeled in with 19-km remaining.

The race was all together for three finishing laps around downtown Sacramento. Peter Sagan (Bora-Hansgrohe) took the win with Team Novo Nordisk’s Andrea Peron finishing just outside the top 10 in 11th place.

The world’s first all-diabetes pro cycling team continues racing at the Amgen Tour of California on Monday with a 194.5-km stage that starts in Rancho Cordova and includes five categorized climbs before a Cat 3 finish into South Lake Tahoe. 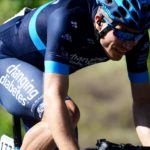 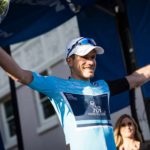