Jebel Hafeet, UAE —Team Novo Nordisk’s Fabio Calabria and Charles Planet both starred in the Stage 3 breakaway at the UAE Tour. This served as Planet’s second consecutive day in the break and he remains in the running for the Abu Dhabi Aviation intermediate sprint jersey classification.

Tuesday’s stage was the first of two mountain stages. The 179-kilometer stage finished with a 10-km climb featuring maximum gradients of 11 percent.

Calabria attacked immediately following the neutral start and Stepan Kuriyanov (Gazprom – RusVelo) followed him. Planet jumped and another Gazprom rider went with him.

The four-man group looked very similar to the Stage 2 breakaway with the only difference being Calabria replaced Sam Brand. The escapees built a maximum gap of 4:20. Through the first intermediate sprint, Calabria led Planet out which moved the Frenchman into the lead in the competition.

Around 95-kilometers into the stage, the peloton decided to reel in the escapees in anticipation of the climb up Jebel Hafeet. At the base of the climb, there was another intermediate sprint where Kuriyanov took top honors which moved him into the lead in the Sprint and Intermediate Sprint competitions. Planet remains in second place and will wear the black Abu Dhabi Aviation intermediate sprint jersey on Stage 4.

Team Novo Nordisk, the world’s first all-diabetes pro cycling team, continues racing at the UAE Tour on Tuesday. The 197-kilometer stage is the longest of the seven-day race and is considered the most difficult stage of the UAE Tour.

“It’s always nice when you can execute a plan. The team is really riding well as a unit. It is exciting to be riding this well together already this early in the season.” 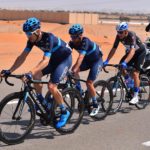 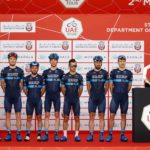