Charles Planet was in the first group of riders to attack following the neutral start. They were brought back and then Lozano and five other riders attacked and within three kilometers had managed to build a one-minute gap. The peloton kept them at a manageable distance throughout the 189-km stage with a maximum gap of around five minutes. Following the second intermediate sprint, three riders including Lozano dropped back to the peloton. With 16 kilometers to go, all escapees were reeled in. A bunch finish ensued with Mark Cavendish (Dimension Data) taking the win. Team Novo Nordisk riders Quentin Valognes and Charles Planet finished inside the top ten in the Best Young Rider category at 8th and 10th respectively.

“The peloton let the breakaway go from the start. The first attempt Charles tried and in the second one, I was out there and they let us go,” Lozano said. ”When we reached the second sprint, the gap was under a minute, so I dropped back so I could help the team heading into the sprint.” 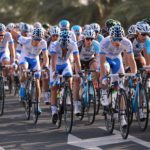 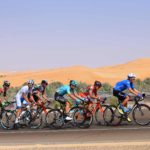