Wet and Fast Final to the Abu Dhabi Tour

Shortly after the start, six riders escaped but never were given much of a gap as they battled it out for time bonuses and cash prizes on the day’s intermediate sprints. All escapees were reeled in with 30 kilometers remaining and the race stayed together for the finishing laps. The final kilometer featured several twist and turns before heading into a straight and flat 250-meter run into the finish. Caleb Ewan (Orica-Scott) took the stage win as Rui Costa (UAE Team Emirates) held on for the overall race victory.

“It was single file the whole day. They say it rains something like five days a year in Abu Dhabi and today it rained,” Planet said. “It was a really, really hard day. Early in the race, I nearly crashed and I lost a lot of confidence. Yet my legs felt good and I was always able to come back after each corner. Hopefully all that sprinting will translate well as we head back to Europe and I hope to be active and achieve a good results for the team next week in Italy.” 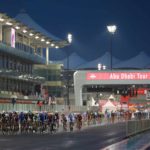 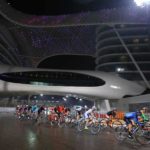