Tsawwassen, CANADA – Sunday’s White Spot | Delta Road Race served as the sole UCI race during BC Superweek. The pace started high on the 12-lap race with breakaways sneaking off shortly after the start of the opening lap.

By the third lap, a large group containing several Rally Cycling and Silber Pro Cycling riders had over a minute and was only gaining time. This threatening breakaway grew their lead to over 90 seconds. On the start of the final lap, the peloton organized and quickly started to take back time.

Up in the break, the escapees stopped cooperating and two riders took off up the road. The duo held on to contest the win while the remaining riders were swept up by the chasing peloton. In the end, Adam De Vos (Rally Cycling) outsprinted Kaler Marshall (Langlois Brown) for the win while Team Novo Nordisk’s Mehdi Benhamouda took on the bunch sprint and finished outside the top 10 in 11th position.

“Today’s strategy was to save my legs for the final sprint while having the other guys active throughout the race. The gap was pretty high and I started to get nervous we wouldn’t bring them back. Lap after lap, the gap started coming back. The last lap was really fast and nervous. Fabio and Stephen dropped me off in good position and I was happy with my sprint.” 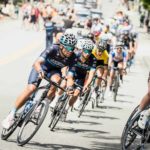 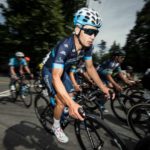 BC Superweek Continues at Ladner Criterium

Opening Night at BC Superweek