Opening Night at BC Superweek

The high-paced “hour of power” was extra demanding for two of Team Novo Nordisk’s riders – Chris Williams and Stephen Clancy – who were returning to racing after being sidelined by injuries for most of the season.

Heading into the final lap, Fabio Calabria and Mehdi Benhamouda were in good position, but a crash on the climb took down the Aussie and made for a chaotic final sprint.

“Today was my first race back in nine months after a collarbone injury and then a knee injury. It was a tough one-hour of racing full gas. Criteriums are an interesting style to return to, but it went okay and I was feeling reasonably well. We had Fabio and Mehdi holding great position throughout the race but unfortunately Fabio was held up in a crash on the last lap and Mehdi finished with the front group.”

Team Novo Nordisk, the world’s first all-diabetes pro cycling squad, continues racing at BC Superweek on Saturday at the Ladner Criterium. The men’s pro race is a 60-lap battle around a technical 0.9-km course through the historic fishing village. 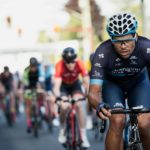 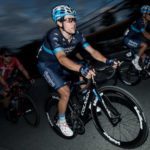 BC Superweek Continues at Ladner Criterium