Unicov, Czech Republic – Friday’s stage 2 of the Czech Cycling Tour got to a fast start in Olomouc, with attacks flying from the gun. The Team Novo Nordisk squad was active early on, eager to put a rider in the breakaway. But after 22km, a group of six riders pulled away- including Alesandro Malaguti (Unieuro-Wilier), Philipp Walseben (Beobank-Corendon), Sven Van Lujk (Parkhotel Valkenburg), Rémi Cavagna (Klein Constantia), Adam Stachowiak (Verva Active Jet) and Artem Ovechkin (Gazprom-Rusvelo)- and eventually established a maximum gap of 3:20.

“Once the break got away without our guys in it” Team Novo Nordisk SVP of Athletics & GM, Vassili Davidenko said, “the goal was to protect our sprinters. So the team worked hard for Andrea Peron and Martijn Verschoor.”

Cannondale-Drapac controlled the peloton for the majority of the stage’s 177 kilometers, and the break was reabsorbed with 10km to go, setting the stage for a bunch sprint.

“It was interesting finale”, Davidenko said, “with lots of turns and a cobblestone roundabout just 500m before the finish, resulting in a very technical sprint.”

Team Novo Nordisk worked to put Verschoor into position for the sprint. “It was a fast and crazy final,” Verschoor said. “Andrea helped me make it to the front before the last corner at 500m to go. But unfortunately, the guy in front of me broke his wheel, forcing me to lose 5 positions. And in the last 500 meters, there were no changes in the sprint group.” 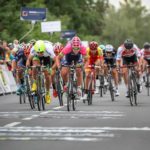 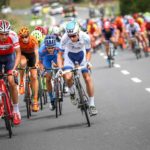 Race Against the Clock at Czech Cycling Tour Opener