“Saturday’s UCI U.S Festival of Speed at the Valley Preferred Cycling Center started with qualifiers at noon and sprint rounds in the afternoon. In the evening, I raced against a Canadian rider in the semi finals (who qualified first in the 200m), and I won that ride to advance to the gold medal sprint final against former world champion and 2012 Olympic bronze medalist Kaarle McCulloch. I won both final rides against Kaarle to take the win!

I look up to Kaarle, and it was an exciting experience getting to race her in the final. Now, she is ranked 11th in the world now, and I gained valuable points that improve my ranking to 19th overall.” 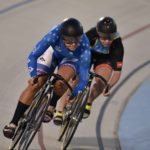