Nyborg, Denmark — Saturday’s individual time trial was a 19.6-kilometer race against the clock throughout the coastal city of Nyborg. The afternoon began with torrential rains and the first riders set off on wet roads, but by the end of the stage, the course was dry. Mads Wurtz Schmidt (Virtu Pro Veloconcept) laid down the fastest time in 23:12. Team Novo Nordisk’s Chris Williams was the team’s best-placed rider, 2:37 behind Schmidt. Michael Valgren (Tinkoff) held on to the overall race lead.

“The course ran a lot faster than it looked during recon,” Williams said. “The course had dried out and you could go full speed every where except through the forest.”

Team Novo Nordisk, the world’s first all-diabetes pro cycling team, concludes racing at the Tour of Denmark with Sunday’s final stage. Stage 5 is a 175-km race that begins in Karrebaeksminde and concludes with ten 6-km laps around Frederiksberg. 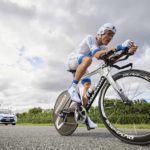 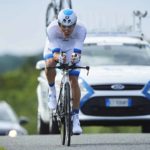