Frederiksberg, Denmark — The five-day Tour of Denmark concluded on Sunday with a 175-kilometer race beginning in Karrebæksminde and finishing with 10 laps around Frederiksberg. With points on the line for the sprint and king of the mountains jerseys, the peloton wasn’t willing to let a breakaway go until after 80 km of racing. Throughout all the early breaks, Team Novo Nordisk’s Chris Williams, David Lozano and Charles Planet were active at the front attempting to get in a break. Eventually, a seven-rider break formed, but the peloton kept the race under control and never let them gain a large gap. The escapees were reeled in on the final laps around Frederiksberg as it started to rain. Heading into the finish, a crash took Team Novo Nordisk’s Andrea Peron, Martijn Verschoor and Planet out of contention. Phil Bauhaus (Bora-Argon 18) sprinted to the win with Michael Valgren (Tinkoff) taking the overall race win. 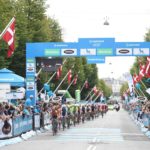 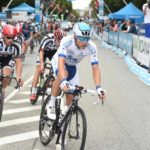