Sønderberg, Denmark — Team Novo Nordisk was extremely active and motivated from the start of Stage 2 at the Tour of Denmark. Chris Williams, Charles Planet and Andrea Peron were all seen attacking off the front trying to create the day’s break. Yet, it took over an hour before the peloton allowed a group to get free on the 180-kilometer course. Eventually four riders earned a gap. With 35 km remaining on the day, a large crash saw Williams, Peron, David Lozano, and Kevin De Mesmaeker hit the ground. All Team Novo Nordisk riders were able to continue racing.

As the race reached the first of three finishing laps around Sonderberg, the escapees were reeled in. A front group of around 50 riders emerged that included Planet. As the race was heading to the line, another bad crash saw Planet and several other riders go down hard. Fortunately, the 22-year-old Frenchman was able to finish. Due to an ambulance-forced closure on the course, all riders in chase groups and the gruppetto were given the same time and place.

“I got caught up in the first crash and spent most of the race trying to catch back up to the main group,” Planet said. “When I finally made it on to that front group for the final laps, I felt really good. I had great position and I was moving up when the crash happened. I really think I could have possibly been in the top 10. I don’t even know what caused the crash; I was on the ground before I knew what had happened. I hurt a lot right now, so we will see how I feel tomorrow.”

Team Novo Nordisk’s Joonas Henttala was unable to finish the stage due to lingering injuries from a crash he experienced in June.

Team Novo Nordisk, the world’s first all-diabetes pro cycling team, continues racing on Friday with Stage 3 of the Tour of Denmark. The 175-km stage begins in Aabenraa and ends with a 21 percent climb up Kiddesvej in Vejle. 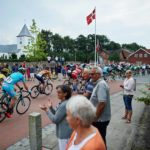 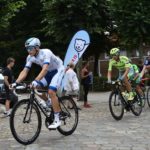