Recharging during the off-season

Ever wondered if the Team Novo Nordisk professional cyclists take time off from riding their bikes? The off-season typically runs from October to January and provides the perfect time for athletes to recharge from a busy season.

Cross-training is a great way to unwind without losing fitness completely when preparing for the new season again.

New Zealander, Hamish Beadle says, “I like to switch off a bit in the off-season as it’s good for the mind and body to do anything other than cycling. I enjoy running, swimming, surfing and mountain biking with family and friends as they don’t feel like you’re doing ‘exercise’ but you’re remaining active. As much as I love riding my bike, it’s really refreshing to relax and enjoy the things you’re not able to do when in racing mode.”

2020 has been a year like no other. The coronavirus pandemic brought the Team Novo Nordisk season to a halt in March with racing only restarting in August. Peter Kusztor says his off-season is different from other years because of the lockdown. He took two weeks off the bike during lockdown which is very unusual for that time of year. The shorter racing season means his off-season has also been shortened.

“I took a two week break when the lockdown was announced before starting to train again. When I re-started, I had no specific training plan, I just rode what I felt like. Usually, I would take one month off completely off the bike in the winter then take two months to come back to the same level as before the break, but this year has been so different. This winter I’ve been running about twice a week along with some easy bike sessions.”

“I enjoy running.” Kusztor continued. “I started running three years ago. At first, I had a bit of pain in my knee so I would only do 20 minutes, now I can do one hour quite comfortably. It’s nice to be able to run in the winter in Hungary, especially when it’s -5 degree Celsius whereas going out on the bike in those temperatures is not always so fun.” 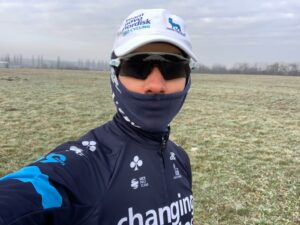 Peter Kusztor has enjoyed running during the off-season

Mehdi Benhamouda also runs. “I diversify my training. I do a bit of gym, a bit of jogging to maintain the pace that allows me to recharge my mind while continuing to keep in shape. I like running and usually do this for two to three weeks when I’m off the bike. As  a professional cyclist though , when in the off-season and not cycling, I do miss my bike. It is in this period that I realize how much I love the job I do.”

Umberto Poli hails from Verona, Italy. Cooking is one of his favorite off-season past times. He tries his hand at new dishes and says they are even better when shared with friends and family. To stay active, he spends time in the mountains discovering new places that are wild.

“I like to take 20 days completely off the bike to go around the world and discover the landscapes that our planet offers.”

Kusztor also gave insight into his dietary changes in the off-season. “I eat much fewer carbs in the off-season when I have no training. In racing, the intensity is much higher so I usually eat more. When at home, I eat less carbs for dinner, especially if I have no training the next day. If I have some long training at home coming up, I’ll eat a bigger portion that day but still much less than I eat at the races.”