More than 2,300 runners took the start line in the French alps for the world’s biggest ultra, which crosses into three countries (France, Italy and Switzerland), over numerous mountain passages in altitudes above 2500m. “UTMB has been a dream race of mine for 5 years,” Stephen said. “But the course was extremely challenging with over 33,000ft of elevation gain.”

The race kicked off at 6:00PM on Friday and followed the Tour du Mont Blanc path, which hikers can complete in 7 to 9 days. But on average, the UTMB runners (those who finish) complete the 170-km trek in 30 to 45 hours, with the winners finishing in just over 20 hours.

“During the first night,” Stephen said, “the race went well for me. But unfortunately, as the sun rose and heat increased, my body did not respond as well. I was struggling with getting calories on board and this significantly slowed me down. But I can’t quit diabetes, so I couldn’t quit a little 105-miler!”

As the race entered its second night, the runners battled a variety of challenging weather, including 32ºC/90ºF temperatures, high-speed wind and a thunderstorm. “That’s mountain weather for you!” Stephen said. But as runners started to drop, Stephen persevered. “The race was a kick in the butt,” he said, “and way harder than I imagined.”

On Sunday at 8:32AM, after almost two days of epic racing in the alps, a wiped out but triumphant Stephen crossed the finish line in to complete his “dream race” in 38:32, as one of only 1468 finishers and as the fastest runner racing with diabetes.

“UTMB is in the books!” Stephen said “After finishing, my muscles were burning for over a day! But to complete this race, and to do so with the huge support of my wife, family and friends, the diabetes community and Team Novo Nordisk, means the world to me. I am eternally grateful to my amazing crew for their love, support and relentless commitment to my dream.“ 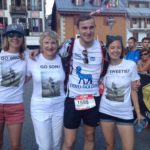 Running Around the World With Diabetes