Bergen, Norway —Team Novo Nordisk made its 2016 Norwegian debut on Wednesday at a cold and wet stage 1 of the Tour de Fjords.

“It was set to be a rainy and windy day,” said Team Novo Nordisk Sport Director Pavel Cherkasov. “Our main focus was to pay attention to our position, confront the weather conditions and help each other at the end. And overall, our riders were active.”

“Today was a pretty hard day due to the weather conditions,” said Team Novo Nordisk rider David Lozano.” It rained the whole day, and the winds were pretty strong. I felt good in the beginning, but by 50km to go I was completely frozen.”

As the riders approached the final 20km, the peloton was split by a fork in the road, allowing for three riders to pull out in front, and a crash inside the last three kilometers set the stage for a chaotic finale.

“I managed to stay in the front group all the way until 1km to go,” Lozano said. “but the race was pretty nervous at the end, since the peloton took a wrong turn and split the group. It’s really hard to race in these conditions, especially coming from 35ºC at my home in Spain. Still, we manage the cold and wet with our Craft apparel.”

“Chris Williams and James Glasspool found a group of 12 riders on the last 30km,” Cherkasov said, “and finished safely inside the time cut. Right at the final finish lap– which was on the 2017 World Championship parcours– Javier Megias came off and the remaining group began to split. Joonas Henttala finished with the group just behind the first bunch. Lozano and Charles Planet finished in the first group.” 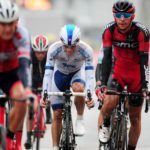 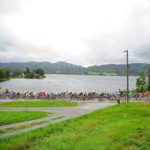