Planet Puts TNN On The Map At Tirreno-Adriatico

Pomerance, Italy — Team Novo Nordisk rider Charles Planet escaped into the Thursday’s main breakaway with five other riders and spent the next 200km ahead of the peloton in the twisting and turning Tuscan countryside.

Planet, 24, found optimal cooperation with his fellow riders on a sunny day leading out and away from the Italian seacoast, and with them quickly established a maximum advantage of more than five minutes, along the way taking points in both the sprint and mountains classifications of the week-long World Tour stage race.

Riders from the team of race leader Damiano Caruso assumed control of the chase once among the rolling hills of Tuscany, and began to close the gap as the leaders worked their way towards the picturesque Etruscan village of Pomerance. Planet and his fellow escapees did not wave goodbye to the TV cameras without a fight, and only in the final 25km of the race found themselves back among the rest of the peloton.

“Since the beginning of the season I have been waiting for a good day for me. I found it today. I felt really good, and I know I have really good form, so the sacrifices and hard work have paid off. I am really tired after today, but I will rest and recover tonight. Try again in the next days? Why not, we’ll see tomorrow.”

“We had a realistic target today to get in the breakaway, and we did a really good job with Charles Planet. Six hours is a long day, and Charles and the rest of the guys really did a good job at the beginning to be active, as well as to help each other throughout the stage. At this level of racing, to have one of our guys on television for five and a half hours all serves as excellent motivation for our riders, our staff and our fans. We’re here, we’re fighting and we want to do the very best that we can. In the next few stages we’ll work for even more positive news.” 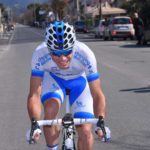 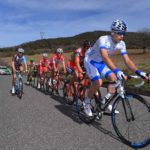