Montalto di Castro, Italy — Team Novo Nordisk found themselves laid up behind a late-race crash on Friday during stage three Tirreno Adriatico, the week-long Italian World Tour stage race that serves to kick off the European cycling season in earnest.

Joonas Henttala only just missed the day’s breakaway after a slight wheel-touch at the beginning of the 25km descent at the start of the race kept him from slipping away with six other riders for the 204km stage.

Instead Team Novo Nordisk was content to ride in the peloton as the race moved through the rolling hills of southern Tuscany and into Lazio, the region of Rome. When the race leader’s team began to accelerate at around 40km to go, Javier Megias and Henttala positioned themselves near the front of the peloton to absorb the benefit of speed and blocking from crosswinds that grew stronger nearer to the finish.

In the final kilometer a slight crash between sprint teams split the peloton and created a slight gap between the first 20 riders and the rest of the field, where Team Novo Nordisk found themselves as the final 800m turned slightly uphill to the finish.

“The breakaway went at kilometer zero, and I wanted to be in it, but unfortunately I had an incident where I knocked with another rider in the neutral section on the downhill and wound up at the very back when it all went down. The first two hours went smoothly, but then the big teams ramped it up in the last 50-60k. We had a lot of up and down, a lot of short climbs and a lot of crosswinds. Not the best day, but we continue fighting.”

“The goal today was to go into the breakaway again, but sometimes it doesn’t happen. A race is a race, it’s unpredictable. We missed our chance, but the next objective was to stay safe in the peloton, especially towards the end of the race as we began to deal with some heavy winds. Tomorrow’s stage is very hard, very challenging, and very difficult. Saving our legs today should should provide us with an advantage tomorrow.” 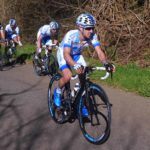 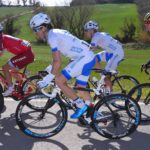