Team Novo Nordisk is honored to receive the Comune di Valdengo’s “Castello d’Oro” award for its mission to promote diabetes outreach and awareness, given Friday night in the province of Biella at the premier edition of the Premio Ciclistico Internazionale.

“It is a great honor to represent the Team and riders today. Team Novo Nordisk, as part the Changing Diabetes® program, plays a key role to create awareness as the first step to fight diabetes, which affects 415 million people worldwide and more than three million in Italy. Our goal is ensuring that people with diabetes are diagnosed earlier, they take care of their conditions to live with as few limitations as possible.”

The Comune di Valdengo honored Team Novo Nordisk with the prize “for merit and tenacity by a sports group devoted to raising awareness and combating diabetes, a terrible and debilitating disease. A team capable of breaking the wall of indifference with a roster exclusively made from athletes with diabetes. A winning team regardless of results. Extraordinary in bringing the message that with diabetes one can thrive, and achieve one’s dreams.” 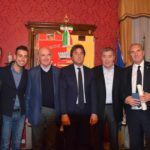