To celebrate World Diabetes Day 2017, Team Novo Nordisk Elite cyclist Becky Furuta traveled to Taiwan to join Novo Nordisk employees, local health care providers and people from the diabetes community for a two-day, 318-km ride to inspire from Taipei to Tainan. But one rider in particular inspired Becky by the way she’s inspiring people affected by diabetes in her home country of Taiwan.

The riders began moving through busy Taipei roads, and I tried to just follow along since I didn’t have a map or a profile of the route, and every instruction was given in Chinese.

The ride itself was beautiful, and the people were absurdly gracious. I was too well fed and, despite the fact that no one spoke much English (and I know exactly one word in Mandarin Chinese), we all enjoyed one another’s company and laughed a great deal along the way.

Without question, however, the best part of my trip was meeting Pei Chen, an 18-year-old girl who attended this year’s Team Novo Nordisk Talent ID Camp.

The participants looked up to her; and she has been a leader in the diabetes community in Taiwan. I was really inspired by how she had overcome challenges and used her experience at the camp to continue doing amazing things in Taiwan.

In a country where there are a lot of cultural norms that make it hard for women to become successful athletes, Pei-Chen has become an example to other women with and without diabetes.

After about 25 frantic miles on the first day, I quickly realized that I needed to sit at the front, which I’d been reluctant to do because I had no idea where we were or where we were going. And of course, none of the roads were closed to traffic, which, in the cities, is insanity.

When I looked back, I realized that Pei Chen and her brother, Taya, had the same idea, so worked to hop on my wheel, ready to rotate through the next 100 miles.

They did, and it was a lot of fun. For the rest of the ride, Pei-Chen and I were never more than inches apart on or off the bike. We took turns at the front all the way to Tainan, in pouring rain and on slick streets and in the midday heat and humidity.

The three of us stayed together for the rest of the ride, including the next day. Taya even talked us into a little 35km “race” after we finished on the second day.

Pei Chen said her camp experience had everything to do with motivating her to improve. She told me that, two years earlier, when she’d done this same ride, she had to have her brother push her on the hills. No one needed to push her this time.

More than the riding, though, I was struck by the impact Pei Chen’s participation in the Talent ID Camp had on the people in her community. Pei Chen’s community still subscribes to many stigmas regarding women and exercise, such as exercise shouldn’t be too vigorous, women shouldn’t sweat and aerobic activity can weaken the body’s defenses.

But Pei Chen’s successes have changed the perspectives of many in her community about women exercising with type 1 diabetes. She’s helped them overcome both their expectations of people with diabetes and their cultural notions about women in sport.

When she showed up to the ride, they treated her every bit like a celebrity. The patients riding looked up to her, and one talked about how she was a “leader in diabetes.”

When her parents sent her to camp, she was so afraid that she had to come to the USA with her brother. Now, she is confident and outspoken, and doing great things for people with diabetes in Taiwan.

And it turns out that Pei Chen had just won a collegiate cycling championship in Taiwan!

The whole event was pretty rad, and the Novo Nordisk reps here were so gracious that I actually felt bad accepting all of their hospitality, but watching the impact the camp had on Pei Chen and her community was remarkable. Totally awesome!

Language wasn’t a barrier for Pei Chen and I because we are connected by the bigger shared experience of managing diabetes and by a love of cycling. As we parted, she left me with a giant bag of sweet rice cakes, and I left her with my TNN gloves and two boxes of Cliff Bars. She was thrilled, and gave me a huge hug. I can’t wait to see what’s next for Pei Chen! 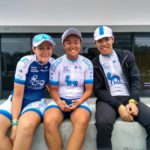