Warsaw, Poland — The Tour de Pologne kicked off on Tuesday with a short 138-kilometer stage. The peloton raced through heavy rains and slick roads. A six-man breakaway escaped early and built a maximum gap of 3:40 before getting caught inside the final 20 km. Soon Maciej Paterski (CCC Sprandi Polkowice) attacked but the peloton reeled him as they reached the finishing circuits around Warsaw. A flurry of attacks ensued but it wasn’t until the final kilometer that several riders broke free. Davide Martinelli (Etixx-Quick Step) held on from this group to take the win.

“This was my first race since Korea, so I am still looking for some speed in the legs. For the first race in the second part of the season, I’m happy with my form,” Charles Planet said. “Today, I didn’t want to take too many risks because of the wet cobblestones and technical finish. I aimed to stay safe and look forward to the next few days of racing and hope to be active in this race.”

Team Novo Nordisk continues racing on Wednesday with Stage 2 of the Tour de Pologne. The 128-km race begins in Tarnowskie Góry and features a lumpy profile before a downhill finish into Katowice. 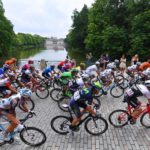 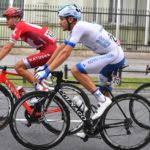