No Luck for Lozano at Tour des Fjords

Odda, Norway — Wednesday’s stage 2 of the Tour des Fjords got off to a relatively smooth start following Tuesday’s soggy and chilly opener. But as the the riders entered Bømlafjord Tunnel– which connects the island of Føyno to the mainland and dips 260m below sea level– the peloton started to become strung out across the road.

The group eventually managed to come back together, and after 60km of racing, an 8-man breakaway was able to pull away and eventually establish an advantage of 5:00 over the peloton. Team Novo Nordisk was eager for a better result after yesterday’s challenging stage 1, and David Lozano (ESP) was determined to lead the charge.

At 20km to go, the gap for the leaders had been reduced to less than 1:00, and a few riders started to attack off the front. The race was all back together with 10km to go, and Lozano remained at the front. But unfortunately, with 6km to go, a rider split the group on the descent, and Lozano was unable to regain his position. Alexander Kristoff (Team Katusha) went on to the stage win, and Lozano finished with the chase group at 43rd, 1:05 behind Kristoff.

“Today, I’m really disappointed” Lozano said,”because I had good legs the all day. I’m happy with how I’m feeling, but I’m frustrated with losing so many chances. Tomorrow looks like it’s going to be a really hard day because of the forecasted weather, so we need to recover and try to do better.”

Team Novo Nordisk continues racing tomorrow at stage 3 of the Tour des Fjords, the longest stage of the 5-day race, where the riders will cover 221 scenic kilometers from Ulvik to Suldalsosen. 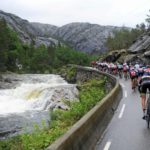 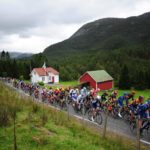