Stavanger, Norway — Team Novo Nordisk wrapped its first appearance at Norway’s Tour des Fjords on Sunday, with a 183.8-kilometer final stage from Hinna Park to Stavanger. A 7-rider breakaway was able to get clear soon into the race, but Team Katusha– looking to secure the yellow jersey for Alexander Kristoff– controlled the peloton and refused to let the break gain much more than a 1:00 advantage, before the last rider was eventually reeled in with 10km to go.

“Finally, our first sunny day in Norway,” said Team Novo Nordisk rider Charles Planet (FRA). “We wanted to be active at the start, and I think that I did what I could. I got into a few breakaway at the start, but finally the main one got away without one of us in it.”

“Our boys were very active in the beginning,” Team Novo Nordisk Sport Director Pavel Cherkasov said, “and then settled into the ‘holding pace’ of the peloton, which started constantly losing riders. All of our riders were able to stay with the main bunch until the last climb of the final lap, where aggressive riding of Katusha split the group into many small ones.”

A group 14 riders– which include Kristoff– made a move inside the final 10km and managed to establish a gap of 0:30 on the peloton, which they maintained to the finish line. Kristoff went on to take the stage win and the yellow jersey, and Planet finished with the chasers, coming in best for Team Novo Nordisk at 36th place.

“I had bad legs yesterday,” Planet said, “but I was optimistic to be better on today’s final stage. I was feeling pretty good when I attacked, so I focused on the finish. We faced crosswinds for most of the stage, which makes the race harder because the position was really important.

In the end, I’m disappointed to miss the group lead with Kristoff, because I was feeling really good on the last KOM. I needed to be in the first 10 positions at the bottom of the climb to make it, but It wasn’t the case. It’s my fault. I tried to come back and close the gap but nobody was strong enough against Katusha.

But after a long season I can see that I’m getting stronger, and with a some rest, I’m hoping for a good month of racing with strong teammates.” 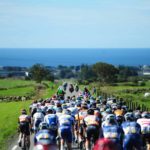 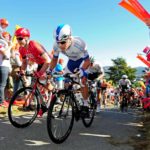