Suldalsosen, Norway — Attacks began early on at Saturday’s stage 4 of theTour des Fjord, and after 20km of racing a break of five riders was allowed to pull away and establish a considerable gap over the peloton.

“Today the stage was pretty slow at the start,” Team Novo Nordisk rider David Lozano said. “The yellow jersey let the break go up to 11 minutes in front, so we thought, this can only end with a fast pace and a lot of stress in the bunch!”

Team Katusha controlled the pace in the peloton, and the Team Novo Nordisk squad were together with the bunch as the race approached its final circuits. On the two finishing circuits, the peloton began to splinter into several small groups, with Lozano emerging in the lead group.

“On the final circuit,” the Spaniard said, “it was a pretty steep climb, and I knew the race was going to split there. But with everyone really tired from racing all week, I made a move to close the gap by myself. But once we hit the climb, I was pretty empty, and it was all I could do to could arrive with the second group. No excuses today, just nothing else left in the legs.”

The final kilometer came down to a head-to-head sprint between Ashbjørn Anderson (Delko Marseille-Provence) and Bjørn Hoem (Team Joker Byggtorget) with Anderson edging out Hoem for the win. Lozano finished best for Team Novo Nordisk at 33rd, 22 seconds behind Andersen. 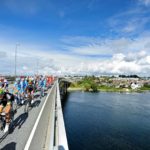