Strong Opener for Peron at Tour of Hainan

The Team Novo Nordisk squad set out to put a rider in the breakaway, but when that didn’t pan out, they shifted focus to setting up the train for stagiaire Quentin Valognes. Peron was taken down by a crash early in the race, but was able to resume racing and rejoin his teammates.

The break was caught with 15km to go, and as the race approached the final 5km the Team Novo Nordisk riders worked get Valognes into position for the sprint.

“There were a few attempts to help Quentin out,” said Team Novo Nordisk Sport Director Pavel Cherkasov, “but unfortunately it was not a full team effort due to the chaotic nature of the sprint.”

Peron stepped up in the sprint and managed to finish 14th, with the same time as stage winner Wilier Andriator (Southeast).

“I had good legs today,” Peron said. “Today’s stage wasn’t one that suites my talents, but in the end, despite the crash, I still felt ok. Tomorrow, I will go for a better result.”

The world’s first all-diabetes pro cycling team continues racing at the Japan Cup on Sunday with the 144.2-km road race. The riders will complete 14 laps around a 10.3-km course. In China, a different squad will take on the second stage of the Tour of Hainan. 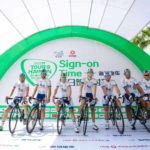 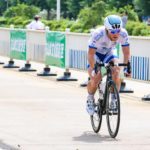 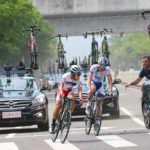