Taihang, China — Team Novo Nordisk rode a tactically smart race on Stage 4 of Tour of Taiyuan and Spaniard David Lozano was able to retain the KOM jersey on a day the breakaway made it all the way to the finishing line.

Stage four was short but hilly and Team Novo Nordisk had all hands on deck from kilometer one to mark any riders that where a threat to the King of the Mountains classification. Eventually a nine-rider breakaway broke clear and opened a gap of around two minutes. With  no real threats to either the General Classification or KOM jersey up front Team Novo Nordisk settled in and rode attentively in the front of the peloton, keeping our Spaniard always in a good position and out of harm’s way.

The escapees took all the points available on the only categorized climb on the day and a few riders tried to attack from the bunch. Lozano followed the move but the group was eventually reeled in.

The stage win was decide in a three-way sprint amongst the strongest of the breakaway and it was Romanian Cristian Raileanu who proved to have the strongest kick and took the victory.

Making the most of his good form Lozano was fifth in the bunch sprint which secured him a 14th place on the stage.

In the King of the Mountains classification Lozano keeps the leadership with 19 points while in the GC he sits in 9th, four minutes and 46 seconds down on the yellow jersey Cameron Piper (Team Illuminate).

The world’s first all diabetes pro cycling team will continue to fly the #ChangingDiabetes flag  in China this Thursday in the “Yellow River Stage” that starts in Yongji Guanque Tower and ends in Hejin Lianchi Park covering 134.4 km and one Cat-3 climb with 40 km to go.

“Today we worked perfectly as a team, keeping all the riders who were a threat to the jersey in check. A breakaway of nine riders, without any dangerous guys eventually went. We rode together as a team always at the front of the peloton. At some point a few teams attacked and I tried to follow them to move up in the overall classification but the move didn’t work out. I then waited for the finish to try and do well in the final kicker. In the end I think I was fourth in the bunch. I have to thank all my teammates today who helped me to secure the jersey!” 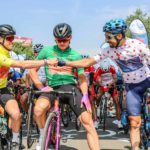 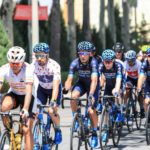