Hejin, China — Team Novo Nordisk put up a great team performance this Thursday on an hectic Stage 5 of Tour of Taiyuan to virtually guarantee that David Lozano wins the King of the Mountains Jersey.

Being the last stage with KOM points on offer the race was on from the gun with multiple teams setting a high pace and launching a flurry of attacks. Team Novo Nordisk was attentive and covered all the moves whilst the peloton rode nervously for nearly two hours with all attempts of a breakaway being folded.

David Lozano, who seized the polka dots jersey on the first stage, benefited from a great team effort in the lead up to the Cat-3 climb, located with 40 km to go, and kept his direct rivals in check. The points went to riders who didn’t pose a threat so Lozano mathematically guaranteed the win of the KOM jersey and will only need to finish the final stage to be proclaimed the King of the Mountains.

After the climb three riders surged ahead but ultimately the stage honours were decided in a bunch sprint with Estonian Martin Laase (Team Illuminate) overpowering the opposition and securing the third win in this race, the fourth for his team.

Irishman Stephen Clancy delivered Lozano in a good position for the final straight and the 30-year-old Spaniard sprinted to 11th on the line, a result that enabled him to climb one spot in the Overall Classification to 8th place.

American Cameron Piper will head into the sixth and final Stage in the Yellow Jersey and should win the race overall.

The inaugural edition of Tour of Taiyuan concludes this Friday with the “Ancient City of Ping Yao Stage”, a mostly flat 100km course that ends in Shanxi Sports Center.

“Today was the last chance to win or loose the KOM jersey and we started really fast in the crosswinds. The peloton was really nervous until the KOM so basically there was no breakaway for two hours of racing. It put a lot of pressure to fight for the KOM jersey and my teammates took the front to put everyone in the wind and secure the jersey. We didn’t take any points in the KOM but we had everything under control. In the end Stephen Clancy put me in a good position and I tried to sprint. I was 11th on the stage and I’m happy to virtually win the jersey. However, tomorrow we want to be ready to maintain, and hopefully to better, our position in the overall classification.” 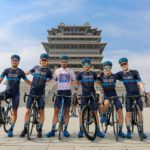 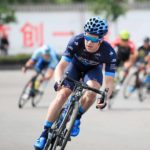