Stagiaires Step Up at Tour of Taihu Lake Opener

The Team Novo Nordisk squad was on the attack in the early part of the race, hoping to put a rider in the breakaway. But when a group of 9 riders pulled away after 50km without a Team Novo Nordisk rider, the squad shifted its focus to setting up veteran Martijn Verschoor for the sprint.

The peloton maintained a fast pace for most of the race, with an average speed of 47km/h, and with 15km to go, the last of breakaway had been reeled in. And as the race approached its final few kilometers, Verschoor was in good position, supported by stagiaires Rik van IJzedoorn and Quentin Valognes.

“The goal for us today was to put Martijn in good position for the sprint,” said van IJzedoorn, “but it was tough to stay together in the hectic final kilometers.”

With 1.5km to go, the trio made a move to the right side on the road, attempting to advance in the group, and with 500m to go they maintained a good position; but at 150m to go Verschoor was boxed in.

“The whole race went really well until the final 1.5km,” said Verschoor. “I made an error and lost several positions and missed the front of the sprint. It’s unfortunate too, because the legs are really good. Hopefully tomorrow we’ll have more luck.”

“Today was the first stage- and a short stage, so it was very nervous,” Valognes said. “And even if the results weren’t there today, it’s good to get this experience and to be prepared for this kind of finish in the future.” 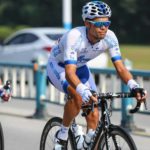 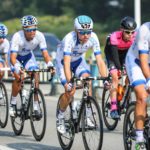