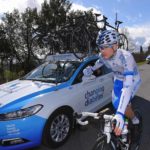 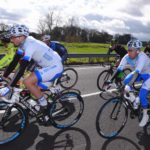 Larciano, Italy — Team Novo Nordisk took the start of the 40th running of the punchy Tuscan one-day circuit race GP Industria & Artigianato on Sunday, with an eye towards the Wednesday start of the important Word Tour stage race Tirreno-Adriatico.

A four-rider breakaway established a healthy gap to the peloton in the first 100km on mostly flat opening circuit, with all eight Team Novo Nordisk riders sitting calmly in the peloton ahead of the final four circuits in the hills.

Rival teams established a competitive rhythm to the chase, eventually recapturing the fugitives as spring weather changed from rain to sun and back again throughout the day. Charles Planet and Andrea Peron slid out together in a hard right turn just as the final hour of racing began, and both were treated for superficial wounds by team medical staff with no serious injury.

Javier Megias and David Lozano held fast to the group of leaders into the final circuit, absorbing the intense pace to remain at the front of the race. Megias, who sat out last week’s World Tour stage race in Abu Dhabi, shifted to a lower tempo to finish, while Lozano kept himself with the leaders until the final climb.

“We were supposed to start in the rain and finish in the sun, but instead it was the opposite: We started in the sun and finished in the rain. Bahrain was leading the group, and every lap they were shedding riders. Each time fewer and fewer, but I managed to stay with them until the last lap. Here it was the opposite of Abu Dhabi – a lot of small roads, a lot of corners, wet and a fast descent. A tricky day, and we came through safely.”