Racing with Diabetes at the 2017 Boston Marathon

On April 17, three Team Novo Nordisk runners raced to inspire at the 2017 Boston Marathon, one of the world’s most premiere sporting events.

After months of training and planning, balancing job, family and diabetes, the runners took the start line, eager to show the world what’s possible with diabetes. Below, the athletes recap how the day played out in their own words.

When I took the start line, all the training that could be done was done and the only thing left was to listen to my body and see what I had on this day.

There was lots of talk about the heat and backwind, and I tried not to worry too much about it. I try to worry about only what I have control over, and the rest I just make adjustments as needed, because we’re all racing in the same elements.

Early on I noticed my heart rate was more elevated than it should be at a 5:50-mile pace. This meant I was working too hard and I was only at mile 5. So I did what a much younger me wouldn’t have done, and that was listen to my body and understand the difference between pushing and driving myself into the ground.

The adjustment paid off, and I was still running at threshold pace (in this case 6:00 to 6:25-mile pace), which is not necessarily easy, but the crowd makes you forget about the pain.

Several times, I looked at a blind runner, runners with prosthetic legs, and just about everyone seemed to be pushing and focused on one thing: get to the finish. The wall of people along the course, the heart of the Boston Marathon, really gets you through the tough miles. Knowing that you’re running with thousands of qualified athletes can humble you, but the goal, like any other race, is to cross the finish as fast as you possibly can on that day.

By mile 21, my legs and body began to feel an energy bounce I did not feel early on, so I took advantage of it and began to run low 6:00 miles, and even got back into the 5:00’s. I guess the marathon can be a rollercoaster, but I was feeling the energy of the crowd and gathered all I could to continue to dig deep.

Before I knew it, I was sprinting to the finish, trying to beat out a good friend of mine that I’ve been racing with since high school. Today I edged him, but Boston is much more than that. We hugged and began to high five and walk towards the bag pick-up, where the thousands of volunteers and spectators continued to cheer!

Finishing, I felt extremely blessed to be a part of an event that was earned, and racing with Changing Diabetes® on my jersey. And today, I felt that my teammates and I did just that.

I believe that by going out and finishing the Boston Marathon in 2:42 some barriers were broken, and I hope that people with diabetes can see that goals can be reached. Maybe running Boston isn’t someone’s goal, but whatever it is should be worth the effort to go after it to the fullest.

No other race compares to the Boston Marathon, and I feel like all the sacrifice and training truly paid off.

This year, in addition to the rolling hills and crazy crowds, it was 20 degrees warmer than anything I’ve trained in so far this year. So it was a tough day for me.

I was strong for the hills, but the heat got to me quick. But I stayed tough and gutted it out. I’m always proud to represent people with diabetes with my teammates, racing against the best runners in the world.

This year was a very challenging road race due to the late Newton hills combined with a sunny day and temperatures over 70ºF/21ºC.

I felt fairly strong through mile 16 despite the heat and lack of shade. I was definitely right around my PR pace, but then the hills ate me up and I had to really dig deep not to stop and walk the last few miles.

It was a tough day in the end, but I’m very proud to show others what can be possible living with diabetes. We’re not just Boston strong, we’re diabetes strong! 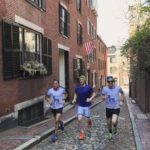