Racing With Diabetes at the Track Cycling World Cup

Since my last World Cup competition in November, I have been only training indoors in the gym and on the Wattbike with Sprinter’s Edge. A little over a week before the UCI Track Cycling World Cup in Los Angeles, California, USA Cycling sent me and other US riders out to the Velo Sports Center to train. It was a good feeling to be back on the boards, with full race equipment and getting the opportunity to familiarize myself with a 250m track again. On days we weren’t on the track, we rode along the beach in sunny California, and since we were at an Extended Stay, I could continue cooking colorful meals.

One morning, I received an Instagram message from 13 year-old, McKenna McKee, who races road, track and cyclocross and aspires to one day be a Team Novo Nordisk rider. I met McKenna and her father for lunch by the beach – McKenna made my day! Between training, I had the opportunity to make some more new friends in the diabetes community. Matt and Marci, ambassadors for Beyond Type 1 came out to watch my training sessions, and along with McKenna, they came to cheer me on for the World Cup with a massive sign! They’re super positive and upbeat, and it meant a lot to me that they could be there. The diabetes community rocks!

#Repost from @mandymarquardt: Meeting 13 year old cyclist, McKenna made my day. We had a lot in common — we love pizza, our favorite color is blue AND we are BOTH #RacingWithDiabetes! ♥ She rocks! We are #StrongerTogether #TheFuture #ChangingDiabetes #DiabetesEmpowered #cycling

The first event at the UCI Track Cycling World Cup was the Team Sprint, with my team sprint partner, Maddie Godby. In training we were turning over some good times, but when we got to the start line, I think nerves hit. We didn’t execute a performance and time that we wanted to, but we walked away with more valuable race experience.

We are currently ranked 5th overall in the UCI Track World Cup Team Sprint standings, and we want to continue to put in the work and make the necessary gains for the future.

In the Sprints, I didn’t qualify with my best time, due to the fact that I need more time on a 250m and time to work on my approach. In my first sprint round, I raced a Russian rider, who qualified faster than me, and is an Olympian and current Team Sprint World Champion. We were elbow to elbow coming out of turn 4, and created some contact – it was a photo finish. Seconds later, “Qualified” popped up next to my name and the crowd cheered. I went on to the second round to race a rider from New Zealand that I respect very much and that I’ve raced against in Trexlertown, two-time Olympian, Natasha Hansen. I gave it everything I had, I could feel the energy inside the velodrome, but lost by about a wheel. I was bummed not to make it to the quarterfinals, and I wanted to continue racing, but I know I laid it all out there.

USA Cycling staff and coaches were phenomenal and their support was a huge help. Everything from a physiologist analyzing power files, mechanics, video footage and massages – it was great to have their support and it made it easy for me to just focus on riding and racing my bike. Representing the USA on home soil, in front of a home crowd was an amazing feeling. Thank you everyone for your support. I’m currently ranked 22nd in the world in the Sprints, and I will continue to work hard to make my country proud. 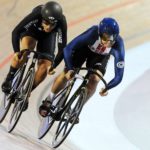