Behringer shows TNN Colors In the Breakaway at Tour of China

Zhijiang, China — Team Novo Nordisk showed their fighting spirit this Wednesday on stage 4 of Tour of China with Oliver Behringer making it into the winning breakaway.

The day served out a mostly flat parcours of 156.5 kilometers but that didn’t deter several riders from fighting to get into the breakaway. After some lively pace in the first 10 km the attacks started in the bunch but none got clear. After the race entered the final circuit Team Novo Nordisk’s Irishman Stephen Clancy played his card and attacked but once again it all came back together.

Soon after his teammate Oliver Behringer followed the winning move and broke clear of the peloton with three other riders. The quartet composed of our Swiss neo-pro, Jeroen Meijers (Taiyuan Miogee Cycling Team), Yauhen Sobal (Minsk Cycling Club) and Muhammad Ahmad Zamri (Terengganu Cycling Team) opened a gap of around five minutes and kept it steady up until 25 km to go. Zamri was the first escapee to drop from the front while Behringer, riding his first breakaway attempt as a pro, did very well to stay in contention with his more experienced opponents up until 10 km to go.

The days’ efforts took its toll on the 23 year-old Swiss who emptied the tank before being caught by the peloton with less than 5000 meters to go. The duo up front survived to the end with Meijers out sprinting Sobal to take the stage and the lead in the overall classification.

Once Behringer was back in the fold of the main field Team Novo Nordisk shifted the focus to position Mehdi Benhamouda for the sprint for third place and the young Frenchman ended up crossing the line just outside the top 10 in 11th position.

This Thursday the world’s first all-diabetes pro cycling team will take on Stage 5 of Tour of China I, a pan flat 116 km stage with a circuit configuration in Hunan.

“I successfully made it into a four-man breakaway. We had a gap of around 4-5 minutes for a long time and after a while we realized we could make it until the finish. One rider dropped with 25 km to go. By the time we reached 15km to go I was pretty empty and was unable to contribute much.

I tried my best to stay with the other two but I was on my limit and dropped with 10km to go on a short uphill. I was caught by the peloton with 5 km remaining and the last two standing from the break made it to the finish with around a minute on the bunch. Mehdi (Benhamouda) went for the sprint for third and finished the stage just outside the top 10.” 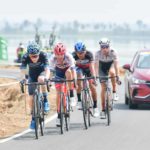 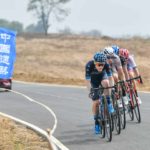