Esbjerg, Denmark — The Tour of Denmark kicked off on Wednesday with the longest day of the five-day stage race at 200 kilometers. Despite threatening clouds, the day remained relatively dry. A four-man break escaped early into the day but the narrow, one-lane Kammerslusen Bridge ended up being a major deciding factor on the day. A crash caused the race to splinter and a new front group set off. Eventually, Daniele Bennati (Tinkoff) set off solo from this group and held on to take the win.

“Today was my first day back after my crash at the Tour de Pologne and I could definitely still feel the effects of the crash,” David Lozano said. “It was a tough day on the bike and the bridge ended up making the day. We had good position and a few of the guys were feeling strong up to that point but if you weren’t in the first few riders, it meant basically the end of your day.”

Team Novo Nordisk, the world’s first all-diabetes pro cycling team, continues racing on Thursday with Stage 2 of the Tour of Denmark. The 178-km stage begins in Romo and features two intermediate sprints and one categorized climb before a straight, uphill finish in Sonderborg. 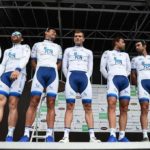