Lozano seizes KOM Jersey on Stage 1 of Tour of Taiyuan

Atlanta, Georgia — Team Novo Nordisk began its campaign in the inaugural edition of Tour of Taiyuan on a high note with Spaniard David Lozano seizing the King of The Mountains Jersey after a mammoth day on climbing on Stage 1.

30-year-old Lozano showed his climbing pedigree on the opening Stage of Tour of Taiyuan, a new 2.2 UCI 5-stage race in China by making the day’s breakaway and racing tactically to finish the day on the podium as the KOM classification leader.

With over 3800m of climbing on the menu and three categorized climbs Lozano did very well to make the 18-man breakaway alongside his teammate Oliver Behringer. The Spaniard was 3rd in the first KOM and 4th in the second KOM and made a decisive attack on the HC climb with around 110 km to go forcing a selection in the front group. Only seven other riders managed to follow Lozano who was the first to summit the climb, thereby securing the KOM jersey with a total of 18 points.

Three other riders were able to bridge across to the leading group and in the end Lozano crossed the finishing line in 8th place. The stage was won by by American Cameron Piper (Team Illuminate).

The world’s first all-diabetes pro cycling team will continue racing in China this Monday. Stage two, denominated the “Great Wall Stage” will take the peloton from Zuoyun Dongshan Forest Park to Datong Yungang Grottoes over 126.4 km, with only one 3rd Cat climb to overcome.

“Today was a 200km stage and the first 30km were pretty flat but afterwards we had 3800m of climbing packed into just 130km. It was definitely not your typical race in China. I made the breakaway together with Oliver (Behringer) and was feeling pretty strong but after four hours or so I started having some cramps and unfortunately missed out on the key move and only managed to take eight place on the stage. I was able to get the King of the Mountains Jersey. Tomorrow is a shorter stage so we should be able to keep the jersey but on stage three there are plenty of KOM’s so I’ll see how the legs feel and if I can increase my lead in the Mountains Classification” 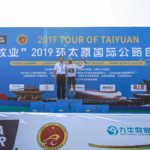 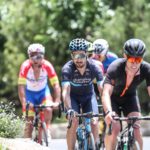