To be honest, my objective is to ride my bike as fast as I possibly can and diabetes is not going to stop me doing that.

After turning professional with Team Novo Nordisk in 2019, Declan Irvine started the 2020 season strongly at the International Tour of Rhodes and International Rhodes Grand Prix with a pair of top 20 finishes before Covid-19 lockdown and international travel restrictions slashed his racing schedule, leaving the then 21-year-old with his focus firmly set on 2021 and picking up where he left off.

Irvine certainly managed to do that in the 100th year anniversary of the discovery of insulin as his 2021 season followed a progressive arc. Reaching its apex in August at the Tour of Denmark and culminating in both triumph and disaster as the 22-year-old produced commanding performances for four days straight before cruelly crashing out on the final stage time trial. Breaking his leg and ending his season. The young Aussie will be back for 2022 recovered and raring to go.

Along with a debut WorldTour appearance in 2019 at the UAE Tour, the Newcastle native earned multiple top 20 stage results at the Tours of China I & II, Tour of Taihu Lake and Tour of Taiyun showing the great progress Irvine is making. Another standpoint included finishing 14th overall in the youth classification at the Tour of Denmark.

Following a strong showing with the development squad, Irvines entrance into the pro ranks was as a stagiaire in September 2018 at the Tour of China. Based on his results throughout the remainder of the season, he earned his first professional contract for the 2019 season.

Irvine had an active childhood complete with motocross, sailing, soccer, swimming and bikes. From an early age, he was interested in trying every sport available. When he was 12 years old, he returned home from a two-week ski trip and his family noticed he had lost a significant amount of weight. A week later, he started feeling very sick. On the morning of August 11th, he had lost his vision. He went to the hospital where he was diagnosed with type 1 diabetes. He was lucky to have a very supportive hospital team who told him that diabetes should never define him.

Fortunately, Irvine had a fellow classmate and soccer teammate who was diagnosed with diabetes when he was only a year old. Irvine knew that this kid was active, so it gave Irvine hope that he could go back to the same activities. A week after being released from the hospital, he played in his soccer team’s grand finals. While they lost, Irvine credits it with being the first moment he felt “normal” again.

When he was 14, Irvine started doing triathlons and quickly got addicted to training and competing. As a junior, he came in second at the Australian Duathlon Championship and represented Australia at the 2015 World Duathlon Championships. That July, Irvine attended one of Team Novo Nordisk’s talent ID camps in the United States. Irvine describes attending camp as a truly memorable experience, “Since being diagnosed I had never come across another athlete with diabetes. So, to be in an environment with 20 other athletes with type 1 diabetes was so cool. It was comforting to know I wasn’t alone.” 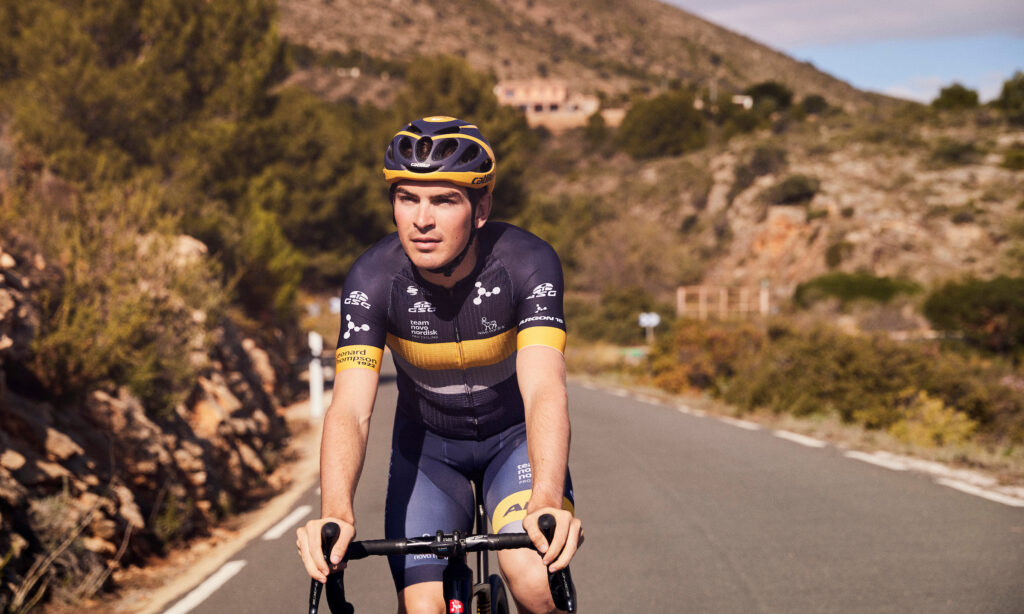 ← Joonas Henttala
Matyas Kopecky →
back to pro team
We use cookies on our website to give you the most relevant experience by remembering your preferences and repeat visits. By clicking “Accept”, you consent to the use of ALL the cookies.
Cookie settingsACCEPT
Manage consent