Team Novo Nordisk celebrated our fifth Milan-San Remo by placing four riders in the day’s breakaway. Andrea Peron, Umberto Poli, Charles Planet and Joonas Henttala proudly showed off the Changing Diabetes jersey at the front of the race for most of the race’s 291km. 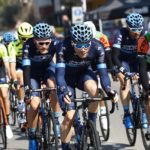 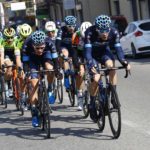 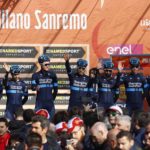 Nice, France —Team Novo Nordisk celebrated their fifth participation in Milan-San Remo with a scintillating performance placing no less than four riders in the day’s breakaway. Italians Andrea Peron and Umberto Poli proudly showed off the Changing Diabetes jersey at the front of the race on home soil and were joined by teammates Charles Planet and Joonas Henttala in an inspiring display of collective team strength.

The world’s first all-diabetes professional cycling team made a bold statement this Saturday in the first monument of the season, the longest one day race in the UCI calendar, by not only keeping the tradition of always placing one rider on the break in “La Classicissima di Primavera” but raised the stakes by having four riders at the front of the race, more than half the team that took the startline in Milan.

While Planet and Henttala were the first to jump on the early move and were later joined by the Italian duo Poli and Peron. The quartet dug deep along with six other riders, all from wildcard teams, and quickly build a lead of over 10 minutes in the opening 30 kilometers.

In the peloton the World Tour teams kept the the escapees controlled and as the raced approached the Passo del Turchino after 130 kilometers of racing, the gap had dropped to just over six and a half minutes.

The lively pace and the accumulated fatigue meant that by the time the escapees reached the second feed zone just three and a half minutes ahead of the bunch, with still 70 kilometers to race.

Sensing the quickly approaching peloton Fausto Masnada (Androni Giocattoli) set off alone with 30 kilometers to go leaving behind his fellow breakaway companions, among which our four #ChangingDiabetes warriors. Planet and Henttala, the last Team Novo Nordisk’s riders upfront were eventually reeled him by the galloping bunch and eventually crossed the finish line 10 minutes after the day’s victor Frenchman Julian Alaphilippe (Deceuninck-QuickStep).

By racing aggressively and placing four riders at the front of one of the most prestigious races in professional cycling Team Novo Nordisk had the best team performance in its history showcasing depth in strength and sending a strong, inspiring message to everyone living with diabetes worldwide.

“It was our fifth time here in Milano-Sanremo. Last night at the bus in the team meeting I asked the guys for an ambitious goal: ‘to get two in the breakaway’ and they gave me a nice with four. It’s history for diabetes and it might even be history in cycling with four guys from the same team in a breakaway at a Monument. It was a thousand kilometers in the breakaway and a thousand kilometers of inspiring, educating and empowering people with diabetes. I’m so proud of the boys and the job they did. Hopefully, some kids saw it on TV and now dream to be there one day as well.”

“After things calmed down, I saw Charles (Planet) was in the break and I thought: ‘fantastic, we did it!”. Then I saw Umberto (Poli) and laughed. Andrea (Peron) was hidden behind him so I didn’t see him right away. Once I realized it was four of us, I initially worried they’d chase us back so we went full gas. It was perfect having teammates there. We worked well together getting bottles and gels for each other.”